Jack took pole position on Sunday, but lost ground when he ran wide at the first corner midway through the race. His second-place finish was his seventh podium of the season and keeps him second in the standings, just 16 points off the top spot.

On Saturday he started second and closed in on the class lead towards the end of the race, only to spin following contact with his key rival. He finished sixth.

Adam set a storming pace on slick tyres in a damp qualifying session on Sunday morning.

But he encountered poor luck when a number of other drivers were able to take advantage of the drying surface to complete their final laps after him, knocking him back to fifth.

A strong opening lap brought him to third, which is where he finished to record his third podium from four races.

On Saturday he was given a drive-through penalty for starting outside his grid marking, dropping him to seventh. He lies sixth in the championship.

Franck Ruimy, who was experiencing the Nurburgring for the first time, made solid progress throughout the weekend, closing the gap to the front-runners across the three days.

The HR Owen-Aerium driver qualified and finished eighth in both Trofeo Pirelli Am races after a pair of ultra-consistent drives that belied his lack of experience.

Laurent de Meeus retained his lead in Coppa Shell Am, despite an unfortunate weekend for the HR Owen driver.

A power-steering issue affected his qualifying session on Saturday and required an heroic effort by the FF Corse mechanics to put him on the grid for the race, which resulted in a 10th-place finish after a mid-race pitstop.

On top form on Sunday, he qualified third, but was eliminated due to damage sustained in a multi-car incident at the first corner.

The Belgian takes a 15-point lead into the next round at Imola on September 27-29.

Adam Carroll, Ferrari Budapest, said: “It’s been a pretty tough weekend for the team, so to end it with a podium is a good reward for everyone’s efforts. I’m frustrated that I made a mistake at the

start of Race One that gave me the drive-through, but it was nice to overtake a few cars during my recovery. Pole position should have been on for Race Two, but I got the chequered flag before any

of my main rivals, so they were all able to do an extra lap on the drying track and knocked me back to fifth. From there, third was a good result.

Franck Ruimy, HR Owen-Aerium, said: “It’s very easy to fall in love with motor racing and my feelings are getting deeper and deeper every event. Every event this year has been tough because of my lack of experience, but the team – and especially the driver coaches – are doing an amazing job and being patient with me while I improve my skills. It was a consistent weekend and I could

race with the cars around me. We all seemed to get faster as the weekend wore on. It was another great experience – though driving on slicks in the damp qualifying on Sunday was new to me –

and I look forward to having another one at Imola.”

Laurent de Meeus, HR Owen, said: “It’s been a weekend of ups and downs, but the main thing is that we’re still ahead in the points thanks to our big win at Le Mans. The team did an incredible job

to fix the power-steering issue between qualifying and the race on Saturday, so it’s a shame we couldn’t achieve the result to reward them due to another issue. I was very pleased to qualify third on

Sunday, which became pole with the success penalties applied from the previous race, but it all went wrong at the first corner. I was on the left side, didn’t anticipate the kink in the braking zone,

lost control of the car and went into a couple of others. I could continue to try and get some points, but there was some damage so I stopped. I think everyone has had one low-scoring round now

so hopefully that’s our one and only one for the year. Bring on Imola!”

Tim Mullen, Sporting Manager, said: “It’s been a mixed weekend, but what’s important is that both Jack Brown and Laurent de Meeus remain firmly in the hunt for both the Trofeo Pirelli Am and

Coppa Shell Am titles. The team did a terrific job to fix Laurent’s car after his issues in qualifying and what happened in Race Two was just unfortunate. Both Jack and Adam bounced back from

tough opening races to record strong podium finishes and Franck did a very good job to gain useful laps in tricky conditions, as he has done all season. Imola should be a thrilling weekend for 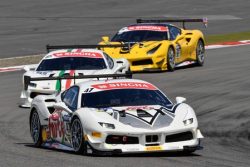